I met Kim through my mom " nancy nancy". She met Kim at the organic food co-op in NW Portland. Installation view of “Pretty Raw: After and Around Helen Frankenthaler,” showing work by Dona Nelson, Jackie Saccoccio, Carrie Moyer, and Laura Owens (courtesy Rose Art Museum, Brandeis University. Photo by Charles Mayer)
WALTHAM, Mass. — To say that painting is having a moment would be ironic — since, despite periodic claims regarding its demise or return, it clearly never went very far away. But we do seem to be in the midst of another wave of attention, including Laura Hoptman’s provocative The Forever Now: Contemporary Painting in an Atemporal World at the Museum of Modern Art and Katy Siegel’s Pretty Raw: After and Around Helen Frankenthaler at Brandeis University’s Rose Art Museum.
Pretty Raw began as a book, Siegel’s soon to be published “The heroine Paint”: After Frankenthaler. Taking advantage of her role as curator-at-large at the Rose, she is presenting a closely related exhibition that incorporates some of the museum’s strong holdings in postwar painting. Although there are a few overlaps between Hoptman and Siegel’s projects (Laura Owens and Mary Weatherford in the exhibition, joined by Amy Sillman in the book), the contemporary work in Pretty Raw is part of a revisionist history that Siegel had already begun to articulate in her 2006 exhibition High Times, Hard Times, where she traced New York painting’s turn toward an inclusive approach — in every sense — to the medium during the 1960s and ’70s. Helen Frankenthaler, “Giant Step” (1975). Private Collection (© 2015 Helen Frankenthaler Foundation, Inc. Artists Rights Society (ARS), New York. Photograph courtesy Gagosian Gallery)
Both the Rose Museum exhibition and the associated book present Helen Frankenthaler as a pivotal figure. Yet her role here is very different from her portrayal as a conduit (or “bridge” according to Morris Louis) in the histories of Abstract Expressionism starring the big boy painters, and in Clement Greenberg’s formalism. In those versions of the story, Frankenthaler was the connective link between Jackson Pollock and later Color Field painting, having embarked upon her stain technique after seeing Pollock’s use of unprimed canvas (an introduction engineered by Greenberg), and in turn inspiring the large pours by Louis that Greenberg latched onto as a continuation of the medium’s formal concerns. Opening with work and ephemera associated with the Tibor de Nagy Gallery (photo by the author for Hyperallergic)
By contrast, Pretty Raw positions Frankenthaler as central to an alternative account of second-generation artists figured as more “feminine,” not only for the contributions of Frankenthaler, Grace Hartigan, Jane Freilicher, and other women, but also for the gay artists who presented a counterpoint to the previous generation’s macho posturing. (Although not part of this exhibition, Jasper Johns’s 1960 “Painting with Two Balls” is relevant, given his recollection to David Bourdon regarding its direct dig at Abstract Expressionist enthusiasm for “ballsy” painting.) Here Frankenthaler is one of a group of artists associated with the Tibor de Nagy Gallery, where an embrace of a younger generation of painters was intermixed with what Frankenthaler described in a 1968 interview with Barbara Rose as a “wild camp” aesthetic — an inclusive approach that is signaled at the opening of Pretty Raw by an eclectic grouping of objects, drawings, and ephemera.
Although the exhibition features a Louis stain painting from the Rose collection (“Number 3,” 1961), Siegel’s overall emphasis is on the more radical possibilities of departure evident in Lynda Benglis’s 1970 “Untitled,” made from pours of pigmented polyurethane foam, which appears nearby. The story of experimentation continues with a long stretch of painted fabric by Robert Kushner hanging in front of a corner where a video screen showing his 1978 Duet, from the performance piece Layers, reveals that the object originally functioned as a prop. Works by Janine Antoni, Cheryl Donegan, Kara Walker, and Polly Apfelbaum (photo by the author for Hyperallergic)
At various points the arrangement of the exhibition encourages an interplay between viewers’ spatial awareness and perception of the artists’ embodied gestures: oblique connections are established, for example, by the proximity of a floor piece by Polly Apfelbaum (“Blue Haired Nirvana,” 1997), photographs of Janine Antoni painting the floor with hair dye for her 1993 “Loving Care,” Cheryl Donegan’s 1993 video Head, with its suggestive play with a stream of milk, and Kara Walker’s unexpected response to Rorschach patterns in a 1995 series of untitled ink and pencil drawings. The body is also evoked in the “Men’s Room” section of the exhibition (entered through a Felix Gonzalez-Torres beaded curtain) by Carroll Dunham’s cartoon-like rendering of phallic forms (“Shape with Points,” 1989-90) or the urination process Andy Warhol employed for his 1978 “Oxidation Paintings” – even as gender identifications are complicated by “BC (4646),” Sterling Ruby’s 2013 quilt-inspired painting.
Starting this narrative with Frankenthaler is a political gesture, yet the rebalancing of the historical record is hardly the only thematic emphasis. Clearly a lot has changed in the interval since the “shock” Barbara Rose described upon seeing photographs of Frankenthaler and Hartigan standing amidst their large canvases in “paint-splattered jeans.” However Frankenthaler was hardly alone in her hostility to being categorized as a woman artist, responding to inevitable questions with a defensive insistence on her identity as a painter, pure and simple. Helen Frankenthaler, “Flirt” (1995). Helen Frankenthaler Foundation (© 2015 Helen Frankenthaler Foundation, Inc. Artists Rights Society (ARS), New York. Photography courtesy Gagosian Gallery)
It was therefore striking that Carrie Moyer and Kathy Butterly took the opportunity of a public conversation with Siegel to talk about color — with Moyer zeroing in on the over-the-top palette in Sam Gilliam’s 1969 “Along” and Butterly highlighting the materiality of pigment in Benglis’s poured polyurethane. Yet it is important to see this emphasis in relation to what Sillman characterizes as the “politics of color” in “House of Frankenthaler” (her contribution to the forthcoming heroine Paint), where she playfully questions the impetus “to recuse oneself from too much color, as a gesture of solemnity and gravitas.” While this show is not solely focused on women, or paint, or color, it includes a lot of all three. More importantly, it presents a framework for an interwoven appreciation of the political as well as aesthetic impact of subtle acts of subversion, such as Moyer’s combination of poured marks and areas of glitter. In the context established by “Pretty Raw,” the decision to emphasize color does not come off as a defensive move (talking about aesthetics rather than identity), but indicates instead how a rebalancing of the larger narrative opens up space to explore a range of diverse yet interrelated concerns. Carrie Moyer talking about Sam Gilliam, with Grace Hartigan’s work visible in the background (photo by the author for Hyperallergic)
One important aspect of the exhibition is its inclusive embrace of contemporary practices that have responded in one way or another to earlier explorations of painting’s expressive potential. The other is Frankenthaler herself. The show opens with a painting that is clearly related to her well-known “Mountains and Sea” (1952). But the canvases threaded throughout the galleries demonstrate the dynamic impact of her ongoing investigation of color and gesture in the decades following this often-reproduced “bridge” painting.
Pretty Raw: After and Around Helen Frankenthaler continues at the Rose Art Museum, Brandeis University (415 South Street, Waltham, Massachusetts) through June 7. Press Release
The gallery is pleased to present an exhibition of new abstract paintings by Tom Burckhardt. It marks the artist’s sixth solo show with the gallery.

The exhibition will comprise fifteen small and medium sized oil paintings. Many of the works are painted on cast plastic, a painting support the artist started working on for his last exhibition. The cast plastic supports are made from molds created by the artist. He has painted trompe l’oeil folds of canvas on the sides of the pieces, the effect of which is that the works inhabit a space somewhere between painting and sculpture. The show will also include a recent group of paintings on more traditional stretched canvas.

The paintings are abstract but suggest references to architecture, landscape, and human forms. The paintings invoke a sense of pareidolia, a psychological phenomenon whereby the viewer sees a face or some other familiar image in an abstract pattern. Many of the works are filled with exquisite and precise detail; others are more muted, with broad patterns. They combine unexpected color combination and dramatic contrasts of patterns, image direction, and subtle and broad mark making.

In conversation with artist and writer David Humphrey, a transcript of which appears in the exhibition catalogue, the artist remarks “A lot of my work has a collage sensibility. I enjoy the friction of different things being put together, things that should not live together but which by declaring them together become a fait accompli.This creates an awkward tension that I like.”

Burckhardt has had over twenty solo exhibitions. In 2014 a travelling exhibition of his FULL STOP (2004-2005), a walk-in version of an artist’s studio made of cardboard at life size, opened at the Columbus College of Art & Design. In 2011 his work was the subject of a solo exhibition at the Weatherspoon Art Museum, Greensboro, NC. The artist is the recipient of the International Association of Art Critics Award, the Richard and Hinda Rosenthal Foundation Award from the Academy of Arts and Letters, and two Pollack-Krasner Foundation grants. The artist lives in New York and spends his summers in Maine.

Posted by victoriajohnson at 10:00 AM No comments: The Illuminator and the Guerrilla Girls appear to have joined forces for a Saturday night projection on the new Whitney Museum (via @illuminator99)
This week, Instagram’s impact on art collecting, Chicago’s missing Keith Haring, 50 buildings in 50 cities, privilege at art museums, the largest object in the universe, and more.

Artsy has conducted a survey of how Instagram impacts art collectors (though there’s no mention of the sample size and methodology). Some extraordinary claims include:
Posted by victoriajohnson at 9:25 AM No comments:

Negar Ahkami reveals complexity of a space in her paintings. Beautiful work. 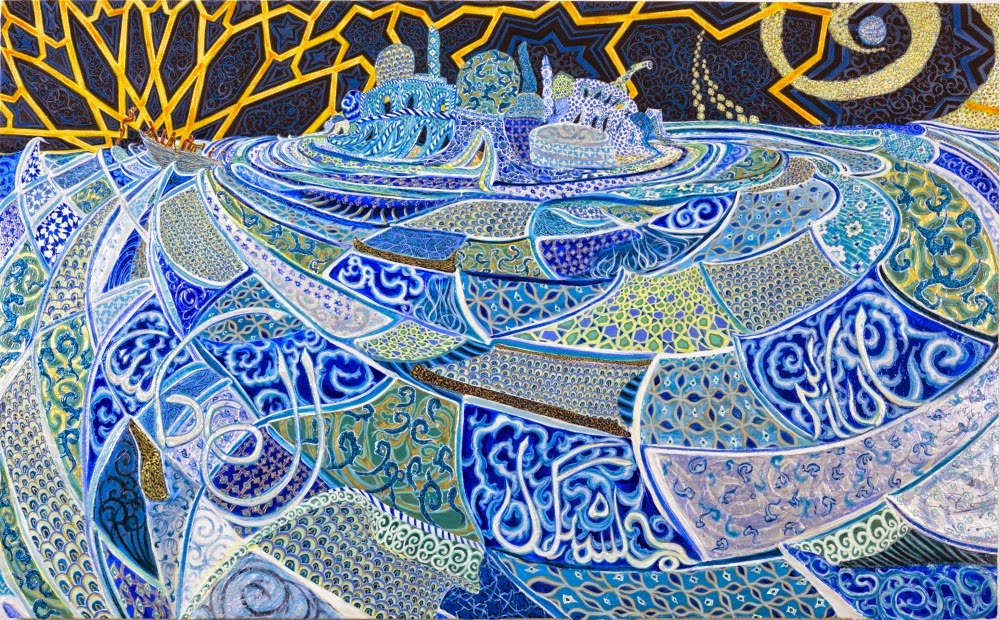 Posted by victoriajohnson at 10:12 AM No comments:

I ran into Karen Kosoglad at the Lisa Harris Gallery Sunday morning the last day of our two person  show, "Color Narratives" and "Contour, Gesture and the Figure". Thank you Lisa Harris and staff for arranging the installation.


Posted by victoriajohnson at 11:47 AM No comments: 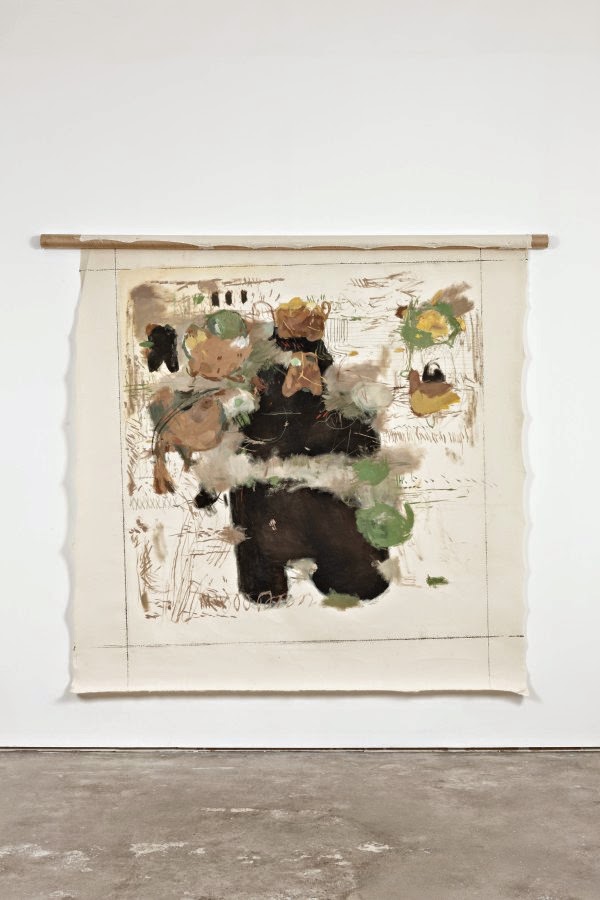 Posted by victoriajohnson at 9:07 AM No comments:

Working In the 619 Building Studio